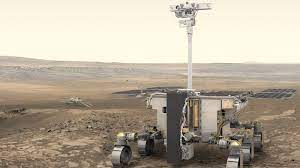 The European Space Agency (ESA) and Russia’s Roscosmos plan to launch their joint Mars rover mission in 2022. It was earlier planned to take off in 2020, but got delayed for several reasons. The main cause behind the delay is that the journey from Earth to Mars is only attempted when the planets are favourably aligned. As the agencies are again gearing up for the launch of the ExoMars “Rosalind Franklin” vehicle, the ESA has shared an Instagram post explaining the incredible features of the cameras aboard it and how they intend to explore the Red Planet.

“These eyes are ready for Mars,” ESA said, sharing a video and some images captured by the cameras. It said the cameras are capable of clicking pictures in panorama and close-up techniques. They can also take 3D maps and a wheel selfie. Currently, the rover is testing the wide range of its photo settings ESA added that engineers have packed as much science as they could into the camera system.

Here’s a look at the cameras and their features in five quick points:

Is Red Notice more (or less) than the sum of its leads: Dwayne Johnson, Ryan Reynolds, and Gal Gadot? We discuss this on Orbital, the Gadgets 360 podcast. Orbital is available on Spotify, Gaana, JioSaavn, Google Podcasts, Apple Podcasts, Amazon Music and wherever you get your podcasts.
COMMENTS

Consumer Behavior- What It Is and Why It’s Important

How to Choose the Best Survey Companies in Calgary