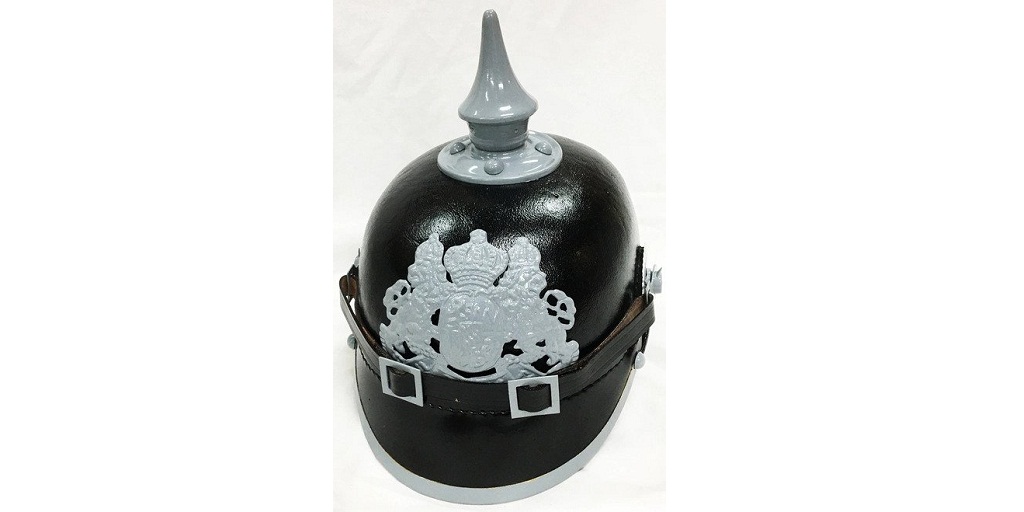 The U.S. M1 and the Adrian Helmet make a good running for the title – but with a name like Stahlhelm, which literally means “steel helmet” in German, it’s hard to contend.

What Sets the Stahlhelm Apart?
An interesting, if general, fact about the Stahlhelm is that it was actually developed in the First World War and not the Second. Even though everyone immediately thinks of Nazi Germany when they see jackboots and a Stahlhelm, it was developed in 1916 to protect against bullets and shrapnel.

And protect against those things it did, much better than the leather Pickelhaube helmets it replaced and better yet than some of the contemporary steel helmets it encountered on the other side of the trenches.

But it gets better. The Stahlhelm, even from its earliest iterations, had a wide visor and sweeping coverage at the back of the neck. It protected the forehead, but also the eyes and nose (to a lesser degree). It also protected the back of the neck, the base of the skull, and the entire crown of the head. It also afforded excellent protection to the temples, and to the temporal and occipital lobes of the brain.

German production also used a harder martensitic steel with high concentrations of nickel and silicon, which improved the strength of the steel. It made these helmets harder and stronger, but as a result, the helmets had to be produced in heated dies, making them more expensive. It makes a unique, soft reference to the old adage, “you get what you pay for,” and the Germans sure did.

A Lasting Legacy
The Stahlhelm was such an effective helmet, and it has become so closely associated with the image of Imperial and later Nazi Germany (and fascism in general) that it has had a lasting impact on culture.

For instance, the symbol itself is, to some, seen as a symbol of authoritarianism. It has been said that Darth Vader’s helmet was, in part, inspired by the classic Stahlhelm design.

Then there is its longevity and how many countries have used it. It was in official use in some capacity or other in Germany for nearly 100 years, between 1916 and 1992, and many other countries adopted it for some role or other. These include but are not limited to China, Hungary, Poland, Argentina, Chile, Yugoslavia, and even Ireland.

Of course, this WW2 German helmet for sale has also become something of a collector’s item, if you can find one.

Where Can I Get This WW2 German Helmet for Sale?
Interested in picking up a Stahlhelm WWII German helmet? Whether you’re looking for an original or a high-quality reproduction, check SARCO, Inc., online at SarcoInc.com first. They carry a wide range of high-quality military collectibles, including original and reproduction pieces, along with an equally large assortment of WW2 reenactment gear.